Marking 20 years since the release of her platinum selling debut album ‘The Soul Sessions’, Joss Stone returns to the stage in 2023 for an evening at the historic London Palladium on the 7th March.

As part of the ‘20 Years of Soul’ tour, the highly revered soul singer, songwriter and Grammy Award winner will perform multiple dates across Europe, through February and March.

With 8 critically and commercially acclaimed albums over the last 16 years, the set list for her London 20 years celebration will be a varied selection of crowd pulling classics as well as captivating, soul driven ballads.

On performing live at the Palladium, Joss said: “I am so excited to play London again. I always love playing at home in the UK”

After releasing ‘The Soul Sessions’ at only 16 years of age, Joss went onto explore a multitude of different styles, drawing inspiration from reggae and hip hop, whilst placing her dynamic and soulful vocals at the forefront.

For Joss’ most recent work, Never Forget My Love (February 2022), she reunited with long-time friend and collaborator Dave Stewart, in order to create ‘adult and deliberate songs’, influenced by rhythm and blues maestro’s Dusty Springfield and Dionne Warwick.

In recent years, Joss Stone has performed sold out London shows at the Royal Festival Hall and at the Eventim Apollo with Burt Bacharach, in a show where The Guardian said she ‘…wraps herself around the classics with a compassion and conviction that make her a Bacharach foil every bit the equal of Dusty or Dionne.’ 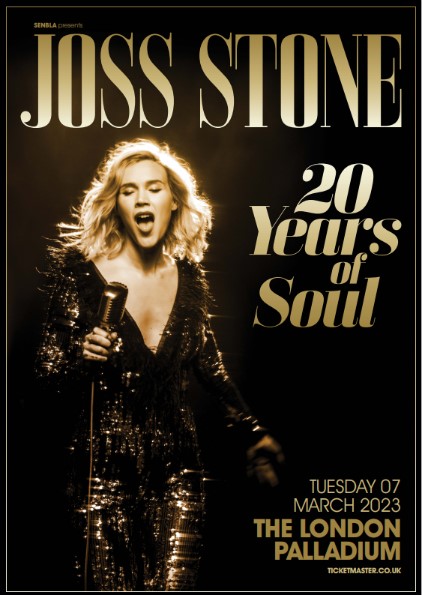