And In The Darkness, Our Hearts Aglow is Weyes Blood’s fifth full length album and follows the breakthrough Titanic Rising. Weyes Blood has drawn comparisons with Joni Mitchell and Karen Carpenter, plugging that heyday of folk pop into current sounds for the modern day. For Natalie Mering, architect of Weyes Blood, storytelling provides a vital social function – “psychologically that’s how we deal with reality”, she says. For the great folk writers, whether it be Dylan or Mitchell, stories figure both as an escape from and a reflection of the world around them. Mering has that special capacity to yield these two aspects, luring listeners into an intoxicating and relatable land of her own. 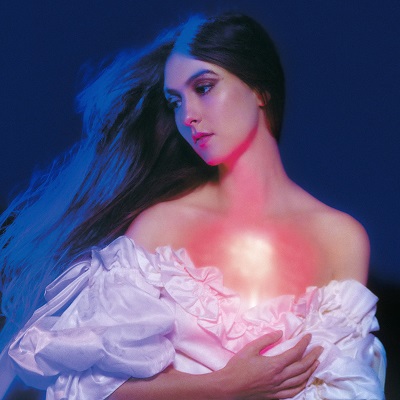 On the plaintive It’s Not Just Me, It’s Everybody, Mering depicts social alienation: “Sitting at this party / Wondering if anyone knows me”. Mering’s lyrics look to avoid singular impressions of emotions, picking up on individual feelings before nurturing them and observing their complexities. Here, isolation is a means to connection as loneliness becomes a shared experience through its utterance. From a disparate, disordered world Mering summons communion in the recognition that her experience of remoteness relates to “everybody”. The song starts off with rudimentary piano chords but then develops into something enveloping and sweeping mirroring the lyrics’ hope for something greater than the sum of individualism.

And In The Darkness musically doesn’t tread new ground from Titanic Rising – it swims in its waters, plunging a universe its predecessor created. In doing so Mering’s music reaches new heights. God Turn Me Into A Flower is a slow burning, wondrous gem. It distils an essence to her songwriting but is also transformative and grandly operatic, as if touching on something seismically delicate. The song confronts desired but distorted images of the self and searches for purity beneath the protective cladding of projection: “It’s the curse of losing yourself when the mirror takes you too far”, Mering laments. The storyteller surrenders her words as the instrumental swells in a movingly transcendental second half of the song. Mering’s songs have provided many prescient lyrical soundbites but God Turn Me Into A Flower lands solely upon a place of feeling not definition in its vulnerable quest for honesty. Oneahtrix Point Never’s layered synth work intricately augments the song’s expansive and spiritual instrumental.

And In The Darkness does lack variation, though, and misses the directness that can be found on Titanic Rising and Front Row Seat to Earth. The Worst Is Done has a nice freewheeling quality in its verses that is typical of previous collaborator Drugdealer but, in the absence of a strong chorus, is ultimately a little aimless. The album changes tack, however, on Twin Flame, a synth pop tune very much built in the image of Beach House. A heavy, sensual bassline underpins the most memorable chorus on the album.

Even though it misses the immediacy of past albums, And In The Darkness is remarkable in its own way. The production is as immaculate as it is ambitious. It’s an album not rife with hits but “growers” which offer plenty to come back to until the next Weyes Blood project. Mering says that on this album she wanted to tap into “the sense of music being [able] to take you to a more sacred space”. Dense and lush, And In The Darkness induces that effect.