oday one of Britain’s most treasured bands, the multi-award-winning Kaiser Chiefs have announced a nationwide arena tour for November 2022 with live favourites The Fratellis and The Sherlocks. Tickets go on sale Friday 25th March at 9am via www.gigsandtours.com and www.ticketmaster.co.uk.

On the announcement, Kaiser Chiefs said: “It’s been a while but we’re going on tour in November and can’t wait to see you all again. We’re looking forward to putting on a big KC show. See you there!”

Formed in Leeds in 2000, Kaiser Chiefs are one of the leading bands of their generation. Fronted by the magnetic Ricky Wilson with Simon Rix on bass, Andrew ‘Whitey’ White on guitar, Nick ‘Peanut’ Baines on keyboards and drummer Vijay Mistry, the band have been Mercury nominated for their debut album, ‘Employment’ and went on to win three BRIT awards, an Ivor Novello award for Album of the Year, and have sold over 8 million albums worldwide.

Kaiser Chiefs have solidly made their mark as heroes within the British music scene, with absolutely no sign of them slowing down. The band have released seven studio albums to date including chart toppers, ‘Yours Truly, Angry Mob’ and ‘Education, Education, Education & War’ plus their much praised 2019 and top 3 album ‘Duck’. Watch this space for new music to come. Kaiser Chiefs have released multiple top ten singles including the infamous number 1 hit ‘Ruby’ and anthems such as ‘Oh My God’, ‘I Predict A Riot’, ‘Everyday I Love You Less and Less’, and ‘Never Miss A Beat’.

Glaswegian trio The Fratellis will also perform, following a rollercoaster year in 2021 which saw them unleash a new album alongside a barrage of singles and collaborations, before rounding the year off by winning the prestigious King Tut’s Songwriting Award at the Scottish Music Awards. They’ll perform songs from their new album, ‘Half Drunk Under a Full Moon’ as well as fan-favourites and indie anthems such as ‘Chelsea Dagger’.

Kaiser Chiefs’ Yorkshire neighbours The Sherlocks will open each night, completing a star-studded line-up. The Sheffield quartet have become one of the most exciting live bands in the UK. Selling out tours across the nation, they have also achieved chart success with two UK Top 10 albums.

As some of the most successful British guitar bands, their live shows are not to be missed. Each band are masters of their craft with setlists packed with hits and an unrivaled energy, nothing less than a ‘reyt good time’.

Tickets go on sale Friday 25th March at 9am https://www.gigsandtours.com/tour/kaiser-chiefs and www.ticketmaster.co.uk 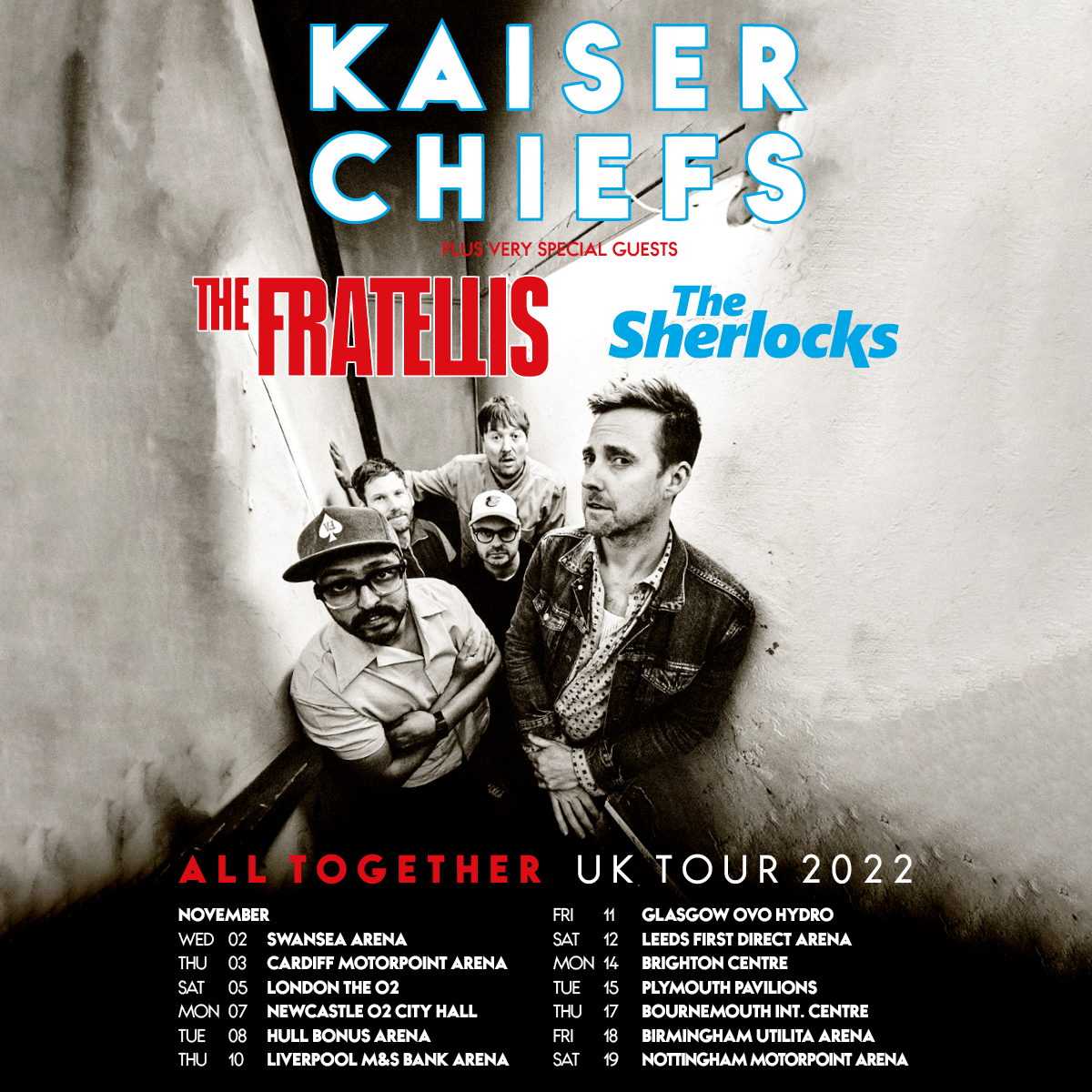