The evolution of Darren Hayes continues to flourish with the release of the iconic artist’s new single, All You Pretty Things and the announcement of his first new album in over 10 years, Homosexual. The album is available to pre-order now here and will be released on 7th October 2022. All You Pretty Things can be listened to below:

The phenomenal Homosexual was entirely written, performed and produced by Darren over the past two years from his base of Los Angeles. Speaking of the record, Darren beautifully describes the thinking behind the title:

“I named my album ‘Homosexual’ for a variety of reasons. The most obvious, is that I’m a gay man who grew up in an era when that word was used to shame and vilify people like me, so I wanted to reclaim it. I’m also a recording artist who came up in an era where being openly gay was frowned upon and I experienced first hand, the attempted erasure of my true identity from the marketing department of a major record label. But perhaps the most important reason I chose this title is that in 2022 I’m living in a time and in a country where the freedoms of LGBTQI+ people are more at risk than they’ve ever been. Moments like the ‘Don’t Say Gay’ bill in Florida, or the constant attacks on trans people, have made it clear to me that now is the time to be as loud as possible about who I am.

So on the front cover of my album, I’m proudly lounging upon my version of a stairway to heaven. Blazoned across me, in the brightest hot pink neon, is a word the 11 year old me used to be terrified of. I lounge proudly underneath the electric buzz of this symbol, this term that used to be used to denigrate people like me. Now it’s my word. Now it means whatever I want it to mean. If you haven’t worked it out yet, I think it means something magical, amazing, unique and essential.

My name is Darren Hayes. And I’m a proud Homosexual”.

The record follows in the tradition of true break-away solo projects, as Hayes explains, “This feels like my first solo record in some ways because it’s the first time I’ve been able to sit down in the studio with drum machines and synthesizers and create a body of work completely on my own. That process brought me back to my teen experience of listening to albums like ‘Faith’ by George Michael or ’Sign O The Times’ by Prince. I wanted to convey that same feeling of real intimacy and complete artistic control and artistic freedom. Having been away from the world for 10 years, doing this seemed like the only thing I hadn’t done yet in my career and the feeling of rebellious emancipation was something that I was desperate to experience in both my personal and public life”.

The album will be available on multiple formats including a 14-track digital version, and 13-track CD, standard double vinyl and signed, limited, deluxe double vinyl. The standard vinyl will feature turquoise coloured vinyl and inner sleeves with unique artwork. The signed deluxe double vinyl will be strictly limited to 1000 and will have peach coloured vinyl, a gatefold cover with unique artwork and an 8-page lyric booklet. Homosexual can be pre-ordered now.

To coincide with the album announcement, Darren also reveals his brand-new single All You Pretty Things. The stunning, emotive All You Pretty Things sees Darren paying tribute to not only some of the LGBTQI+ pioneers but also those who sadly lost their lives in the awful shooting at the Pulse nightclub in Orlando Florida in 2016. The single follows three tasters to the album in the form of the strikingly personal Let’s Try Being In Love, Do You Remember? And Poison Blood.

“When I wrote my new album I knew I wanted to speak about the cultural significance of being part of the queer community that had felt off limits to me in the past, having felt so smothered by the very controlling image department of a major label at the beginning of my career. One of the things that really saddened me as I did my research about my own cultural background was the massive loss of talent that disappeared, seemingly overnight, as a result of the AIDS crisis in the 1990’s during my teenage years. As I’ve grown older, I have felt a real debt to the musical pioneers like Patrick Cowley and Sylvester who have left their DNA in almost all the music I grew up loving, without me realizing it. Fast forward to 2016, during my self-proclaimed ‘retirement’, the horrific events of the Pulse Nightclub shooting in Orlando Florida was a shocking wakeup call for me. Like everyone else, I was devastated by the loss of human life, but I couldn’t shake the thought of the fact that this was so personal. These victims were ‘my’ people, my queer family, dancing and singing in a sacred space that our community had always assumed was a safe space.

I read a People Magazine memorial article that highlighted the wonderful qualities of those who lost their lives, with quotes from friends and families that listed the most endearing personal qualities about each person, without any mention of the perpetrator. I was so moved by the notion of ‘the moment before’ and the focus on these perfect, beautiful souls in the seconds before their lives would be changed. I decided to write a song about their happiness frozen in time in a way they deserved to be remembered. I connected that joyful moment to the LGBTQI musical pioneers who have inspired me, now long passed, and those political activists responsible for the freedoms I enjoy today and I came up with my own way to say thank you with a simple phrase: We’ve Got To Dance to Remember Them. Ultimately, that’s where my own freedom began. I really came out and into myself on the dance floor and that’s where my tribute continues. ” 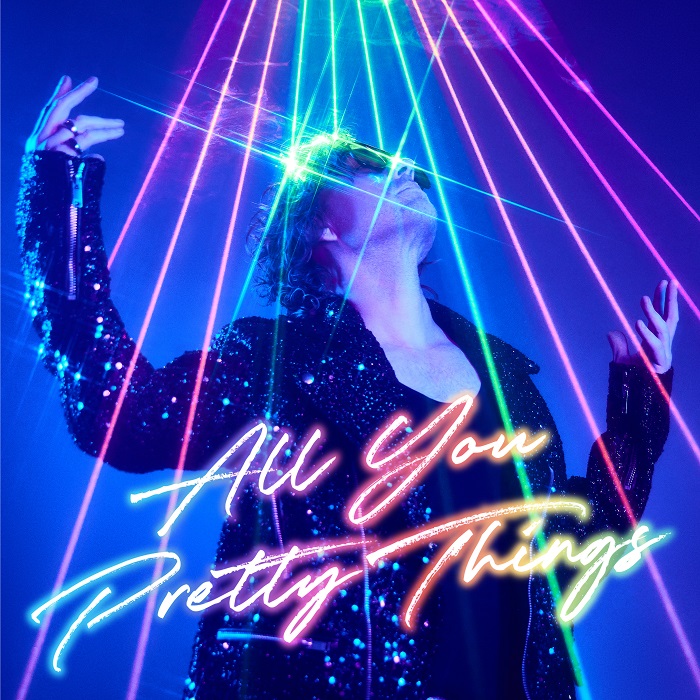 As well as the forthcoming Homosexual, Darren has also announced a special VIP zoom event for 20 lucky fans, taking place on Tuesday 23rd August and hosted by the amazing Suzi Ruffell. Fans will get the chance to ask Darren a question and details will be announced on Darren’s socials this week. He also recently announced his Do You Remember? UK tour, his first in over a decade. The tour celebrates 25 years of Savage Garden, Darren’s well-established solo career and more. Ticket sales went so well that extra dates were announced, pre-sales sold out in a matter of minutes and Birmingham, London and Manchester are sold out. To purchase tickets, visit www.gigsandtours.com, www.ticketmaster.co.uk and www.darrenhayes.com.

As the lead singer and songwriter of duo Savage Garden, Australian born Darren Hayes quickly dominated the pop landscape achieving an impressive 10 UK Top 40 hits from I Want You, To The Moon and Back, to I Knew I Loved You to U.S Billboard number ones including the timeless Truly Madly Deeply. With Savage Garden and as a solo recording artist in his own right, Darren has sold over 30 million albums globally. 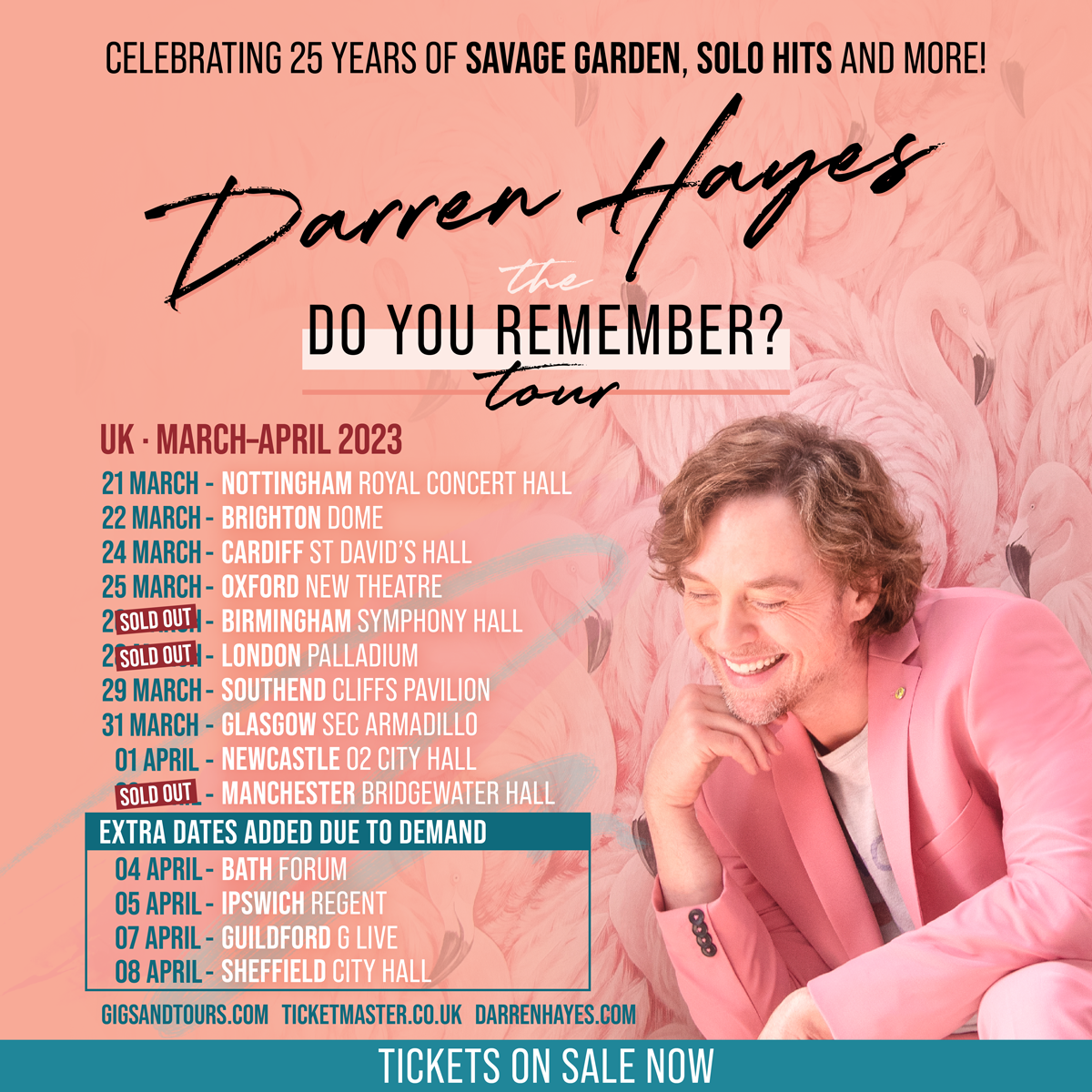