Circa Waves have announced a huge UK headline tour for January/February 2023, full details below.

The Never Going Under Tour will be in support of the band’s highly anticipated fifth album of the same name, which was announced last week for release 13 January 2023 via Lower Third / PIAS.

Speaking about the tour, frontman Kieran Shudall said: “We are so excited to get out and play in front of you all again! These new tunes are gonna sound massive live alongside all our other records. See you soon. Can’t wait!”

Announced today, the 2023 tour will see the band play iconic venues around the country, including O2 Academy Brixton in London on Friday 3 February.

Never Going Under is the band’s highly anticipated fifth record, and the encapsulation of a continued upward trajectory for Circa Waves over the last decade. Becoming one of Britain’s most influential and adored guitar bands, the four piece’s dedication to constantly developing their sound has seen them secure increasingly high positions in the Official Album Charts, as well as amassing an army of dedicated fans.

Never Going Under comes fresh in the wake of a huge summer for Circa Waves, with massive main stage festival performances and the release of the surprise EP Hell On Earth.

The latest stage in their illustrious career, this record sees the band continue to push themselves into new territories and effortlessly cement their place in the scene.

Tickets for the tour go on sale next Friday (7th October) at 10am, with O2 and fan presales running from Tuesday onwards. The full list of dates can be found below, and Circa Waves new album is available to pre-order here. 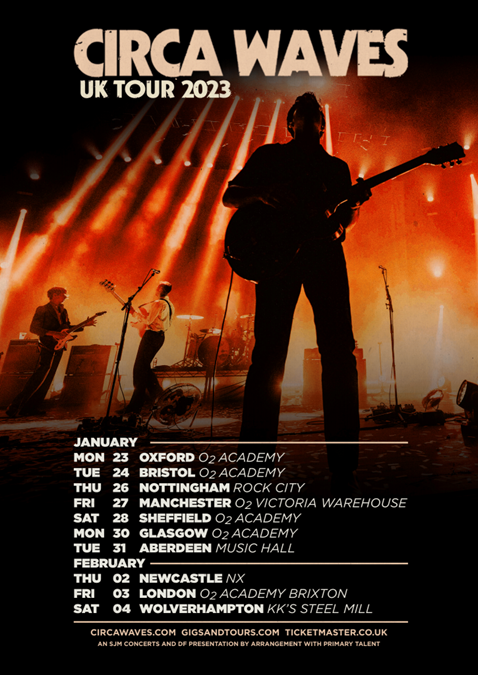