Oh the 90’s! We miss those days. Not just for being able to get away with horrific clothing choices but for the amazing output of pop music that the decade so generously offered us. It was the time of the Spice Girls, All Saints, Aqua and Alanis. Not to mention Backstreet Boys, The Corrs and Steps. And joining these iconic pop heavyweights came Five – or 5ive, as they were so wittingly branded.

Over the course of a couple of years as the 90’s drew to a close, Five dominated the charts with hits that included When The Lights Go Out, Got The Feelin’, Keep On Movin’, If Ya Getting Down and a number one collaborative cover of We Will Rock You with Queen themselves. After disbanding in the early noughties, variations of the band have been making the rounds in venues around the world, performing the hits to a fanbase that continues to crave more from their favourite boyband. Now a three-piece with founding members Scott Robinson, Richie Neville and Sean Conlon, Five have recently released a new album, appropriately titled, TIME – their first in almost two decades.

Ahead of a performance at this Jubilee weekends Mighty Hoopla festival, we caught up with former spikey haired baby of the band, Scott Robinson to talk about the new record and the bands incredible career. Here is what he had to tell us…

Brendon Veevers: Hey there Scott, how are you doing and where does this interview find you?

Scott Robinson: Currently in the middle of doing some home improvement. I’m enjoying mucking in and knocking down walls. It’s been quite stressful but fun at the same time.

BV: So, congratulations on the new album and 25 years with Five. Lets start with the new album because its been 20 years since your last. Without stating the obvious in that its been a long time since a new album has been released by Five, and without assuming that is the reason for the album title, can you tell us why you landed on the name TIME for this record?

SR: You hit the nail on the head! Really, the reason why we called the album TIME is because it’s been such a long TIME since we released new music. And the time was perfect. Sounds like a cliché but we never really had time to make the album because of our busy schedule doing gigs all over Europe, the UK and Australia. When the pandemic hit we were able to focus on doing the album properly. At the beginning of lockdown all I was doing was drinking beer and doing Tik-Toks, So it was a good time to start focusing on new music lol. 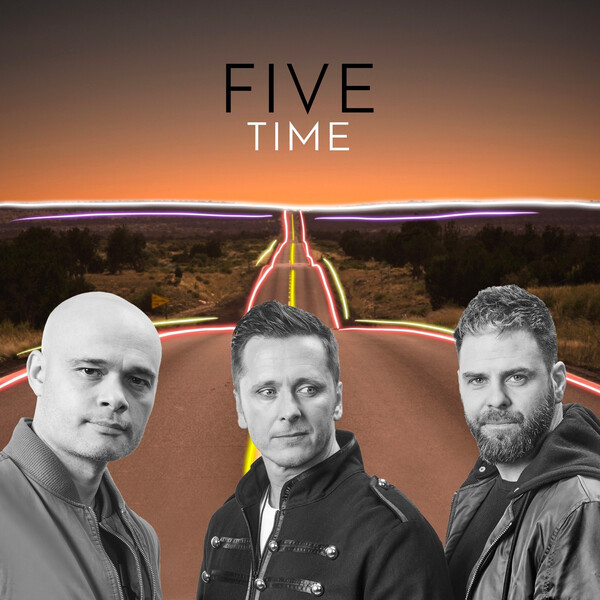 BV: Do you feel you have more control or more of a voice these days compared to the early years?

SR: 100%! Myself, Sean and Ritchie are now doing this because we want to and we enjoy each other’s company. It’s an absolute pleasure to work with those guys. We are so lucky that we have been given a second chance. And we have 100% grabbed that with both hands and appreciate every minute of it.

BV: With the new record you all helped write and produce the tracks. Was this important to you all this time around to have more control and provide more personal direction for your music?

SR: To be fair we have always had a hand in writing the songs. It was lovely to actually do everything ourselves this time. With no big machine behind us everything you see we achieved ourselves. Sean learnt how to produce in lockdown and I think he’s done an amazing job. And I’m sure he will go on to produce for years to come.

BV: Fans know Five for so many huge 90’s pop tracks so an album 20 years later might have worried long time fans that perhaps there is a completely new sound and while there is a reinvented sound for the band there are still plenty of 90’s Five elements in there which make it a current yet nostalgic album. Was it important for you to retain that 90’s nostalgia on TIME for the long-time fanbase?

SR: When we were in the studio we were very mindful that it had been 20 years but we still wanted to have the Five sound. But we also wanted to show progression and not be dated. I truly think we got the balance right with this album and the nod to the past was well balanced, with the nod to the now and the future.

BV: It’s been a while since you recorded as the original 5-piece but was it strange going into the studio as Five without your former counterparts to record new music for the catalogue?

BV: The group have obviously gone through a few different transformations over the years. As one of the members who has been a part of the group throughout every variation of Five, how have you found it?

SR: To be honest with you I have never been happier to be a member of the band. I struggled the 1st time around. We were overworked. And if I’m completely honest, not completely looked after. Mental Health wasn’t really spoken about but obviously existed. I have been with my wife Kerry since the very start of the band and she helped me through. Being in the band this time around is so much easier. We all have kids and love spending time together.

BV: Has there been any indication of all 5 original members coming back together or do you see the three of you flying the Five flag from here on out?

SR: Obviously you never know what the future holds and what is around the corner. All that we know is we are the 3 members of the band that want to be here and we are more than happy with the way we are going right now.

BV: Looking back over the years, the pop scene is a very different place these days compared to the 90’s. What would you say you miss the most about the early years of Five?

SR: I honestly don’t miss anything from the nineties. That was then, this is now and I’m loving the 2nd chance that we have been given.

BV: I want to ask you for some of your favs. A bit of a quick fire answer type of deal….

Favourite Five single from the 90s and noughties?

BV: Favourite concert that you performed?

SR: Either The O2 Arena for the Big Reunion or Party in the Park with Queen!

BV: Proudest accomplishment of your career?

SR: Performing with Queen. And taking We Will Rock You to number one!

BV: Favourite track from TIME and why?

SR: My favourite track from the new album is the title track, TIME. It’s a beautiful song and not something you would expect from from Five as a band.

BV: Five came out in the best decade of pop music, in my opinion. What was the best part of being in a 90’s boyband for you?

SR: As you said it’s the best era of music so I’m very proud to have been part of it. Even more proud that I’m still flying the flag with Sean and Ritchie.

BV: Five became huge at a time when you and the rest of the guys were still really quite young. Looking back at those really early days, do you think you were prepared for fame and how did you manage what fame would do to your life?

SR: I think it was too much, too soon. I was far too young and got swept away with it. As I said earlier, if it hadn’t been for my wife Kerry helping me through some really tough times I don’t think I would be here today to tell the tale.

BV: Back in the day the goal from labels was to shift records and sell out tours and to get on the charts. Times has changed though and Five has changed. What’s the drive or motivation behind releasing new music for you these days?

SR: We are releasing music now because we want to end as we want to and we think we owe it to the fans that have supported us for so many years. They have waited 20 years for this album so I hope we have lived up to their expectations.

BV: You have been a part of many tours both here and in places like Australia that celebrate the 90’s and you have been with many other acts from the 90’s. These must be quite nice nostalgic trips down memory lane for everyone, yeah? Do you share stories from early days with other acts?

SR: It’s great doing multi-act line-ups. I have had some really good times with people like Damage, 911, Blue and Peter Andre. We have all gone through such similar things in our lives.

BV: What the plans for touring in 2022 and beyond?

SR: We are really excited that gigs are starting to come back. We have so many shows this year and next year. This year is already booked up so let’s hope that Covid stays away and we can keep on doing what we love doing. Making music and singing it to our fans.