Taylor Swift, the Queen of heartbreak anthems and writing about her exes is back with her tenth studio album Midnights… and this time she is entering her Femme Fetale era, with dark, allusive lyrics intertwined with revenge plots. The album is written and produced by Swift and her main collaborator Jack Antonoff, with her boyfriend Joe Alwyn even helping to co-write two of the tracks, Vigilante Shit and Sweet Nothing. 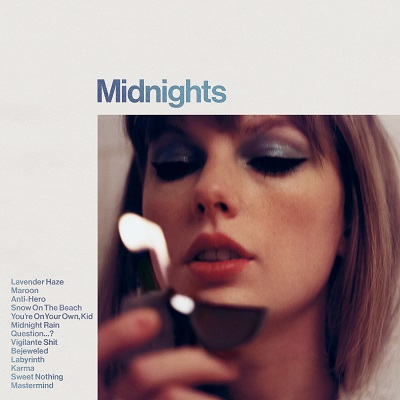 The darker themes and melodies Swift uses on Midnights are based on five things that kept her awake at night, including self-loathing, what might’ve been, falling in love, falling apart and fantasising about revenge. Swift can be seen to experiment with moody electronic beats, synthesisers and manipulated vocals to convey her new sound. This is shown particularly well on the slow, moody track Midnight Rain, where Swift can be heard through re-worked vocals saying ‘He was sunshine / I was midnight rain’, with Swift suggesting she’s not the innocent protagonist of her earlier works. This new wicked era of Swift is welcomed with open arms, making a nice change from her usual wholesome lyrics.

It also makes perfect sense that Swift would enlist the help of alternative singer Lana Del Rey, best known for her unfiltered lyrics and sinister themes to help on Midnights. The highly anticipated collaboration between the two singers for Snow On The Beach, sees Swift and Rey successfully create a light, dreamy melody overlaid with their soft, echoey vocals, perfectly encapsulating two lovers falling in love. However, as enjoyable as the collab between the two is, it does feel disappointing that Swift didn’t use Rey’s expertise to touch upon more ominous themes rather than love.

Swift appears to save her more menacing lyrics on the track Vigilante Shit, where her cryptic revenge writing leaves listeners speculating whether the song is about Scooter Braun or Kanye West, who Swift has previously feuded with. Swift sings over a stripped back beat: ‘She needed cold, hard proof, so I gave her some / She had the envelope, where you think she got it from? / Now she gets the house, gets the kids, gets the pride / Picture me thick as thieves with your ex-wife’. A sly dig which could be meant for Scooter or Kanye who have both gone through recent public divorces. Swift’s clever, obscure writing has publicly humiliated them by driving the internet mad theorising which man the track is about, the sweetest revenge she could ask for.

Although some OG Swifties may struggle to get onboard with Swift’s cooler sound, it’s exciting to hear Swift experiment with her more sinister side. Midnights is filled with refreshing beats and cryptic messages that will keep listeners busy deciphering their meaning for hours. Swift moves from being the relatable heartbreak queen to even more relatable now she has revealed her dark, menacing side.