They say imitation is the sincerest form of flattery and if that is the case then artists such as Tears For Fears, Ultravox, and Bryan Ferry should feel downright proud as punch at Riki’s second studio album Gold. The darkwave heiress has rewritten the retro influence and created a steamroller of synth splendour that confidently struts in line with her predecessors. With the help of shiny drum machines, pounding fretless bass and ethereal sequencers, Riki quietly transcends the eyeliner of the past and paints herself a new and bright future (still with copious amounts of eyeliner). 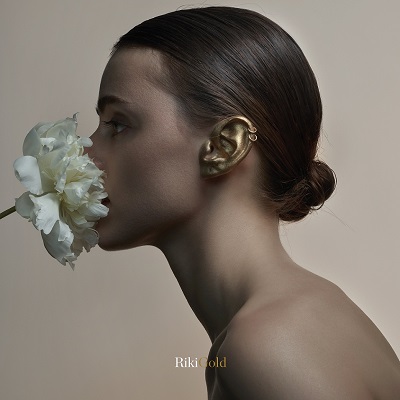 LA-based visual artist Riki firmly immersed herself in the anarcho post punk scenes of California, playing synth in the deathrock band Crimson Scarlet under the pseudonym Niff Nawar. In 2017 she began her solo career adopting the new identity of Riki and with the release of her 2020 self-titled debut album crystallised herself as a New-Romantic dynamo. Not much is known of the synth-pop artist, preferring to let her artistic endeavours do the talking. However, I did discover that a crush of the singer is the French general and emperor Napoleon, who I believe ranked number two behind Paul Rudd as this years sexiest man alive. Riki likes to remain askew, musically and privately.

With the release of Gold, Riki has moved away from her oblique darkwave roots and established a cleaner, sleeker production that delves into the realms of melancholia pop. Working with Telefon Tel Aviv co-founder Josh Eustis (who produced Gold), Riki has immersed herself in the quieter moments of new wave by creating an album full of warmth and delicacy. The title Gold can be seen as an obvious nod to Spandau Ballet as the 80’s musical influence is displayed throughout the record. Rather than downplay the musical connectivity of Heaven 17 and Strawberry Switchblade, Riki channels their synthesised talents and designs an album full of nostalgia and hypnotic beats that never feels dated.

The album opens with the majestic Lo which features Blue Monday inspired synthesisers as well as repetitive vocals and drum beats. This catchy carousel of sound is disturbed by the singers haunting howl of the word “Lo” that perpetuates and corrupts the sensual melody. Lo acts as a precursor of what is to come: sentimental concepts reshaped using Riki’s perspective. The album’s debut single Marigold is a duet with the aforementioned Josh Eustis that is an upbeat masterclass of synth-pop. The track is so charming and delightful that it is hard not to get swept up in the cuteness of it all. Marigold is a lovely and sweet song on an album full of New Romantic bliss.

Tracks such as Oil & Metal and Viktor emphasise Riki’s wonderfully sleek vocals as they intertwine with the atmospheric instrumentation. Her vocals act as another instrument rather than a standout melody, creating a giant canvas of sound where all tools are used equally. Riki has constructed a formula that is endearing and incredibly visceral. The song Sonar feels like we are being put into an anaesthetic state by the use of revolving sequencers and backing vocals that echo and gently swarm and consume. The songstress has perfected the aura of melodrama through gentle lyrics and calming, roaming musical arrangement.

The magnificent Florence & Selena closes out the LP; a track that achieves absolute nostalgic euphoria. It is the standout on an album full of hauntingly delicate pop. The song feels like a climax to the end of a cinematic love story. A vibrant saxophone solo eases us in and leads us into an atmospheric wonderland, full of Riki’s sublime vocals that gradually bury deep into our consciousness as the chorus wraps us in a blanket of pure pop. The song is what Riki has been building to the entire album and it handles the burden beautifully.

Picasso said “good artists borrow, great artists steal,” Riki is a great artist who may have stolen the eighties handbook as a basis for an album, but she is one of those nice thieves, like Aladdin or prisoner 24601. Gold is full of warmth and delicate intoxication, and I cannot wait to see what this melancholia pop-star does next.