You Tube wormholes are dangerous places. They can find you questioning your life at 3am while you watch videos on things you never even knew existed. However, they can also be one of the best places to discover new and amazing music. I’m sure I’m not be the only one who discovered LP this way, clicking on an intriguingly entitled song of theirs called Muddy Waters. A video of a performance of a song presumably named after one of the most famous blues musicians ever performed by a cool-looking artist that had an insanely high number of views caught my eye and I am glad to have investigated. In some cases, performance videos can transcend anything an artist will ever do, and LP’s Muddy Waters may just be one of them. This does not take away from the excitement for the release of LP’s sixth studio album Churches however. 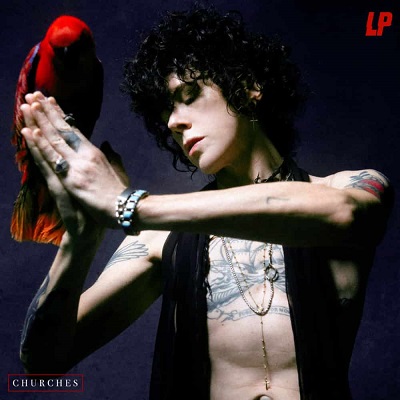 Opener When We Touch sees LP singing in a more vulnerable style than we are used to. The song begins with what can almost be described as a crescendo after which the track settles down to leave room for her soft vocals, but when the chorus hits, it brings with it a much larger crescendo with crash cymbals being used to full effect.

The fact that LP displays a different side to her voice with her vulnerable delivery of ‘when we touch’ speaks of the album as a whole in terms of the disparity between certain tracks. For example, immediately following the expressive opening number comes Goodbye which changes the tune of the album completely, employing an electronic intro and beat that supports LP’s harsher vocals in a much more up-tempo song. But then later comes the magnificent The One That You Love that almost takes its roots in a country styling, opening with an enticing ascending and descending electric guitar riff after which satisfyingly heavy but clean drums break into the nicely produced and ostentatious vocals which are joined by strummed acoustic guitar. This standout track is much more epic than your standard country number though! Yet things change once again with succeeding song Rainbow in which the fingerpicked guitar is more subtle, as is the infatuating vocal motif of the ‘oh, why’s’ in the chorus.

Despite these alterations within the journey of the album, most of the lyrics focus on love in the typical way songwriters have done so for decades. Although the album’s title track condemns religion’s oppression and history, much like Hozier’s iconic Take Me To Church, in the end LP resolves the anguish by explaining that ‘my church is love’. However, the lyric LP penned for Safe Here is much less predictable. Deviating from the theme of love makes this lyric stand out and makes it more memorable and relatable. Indeed, lines such as ‘always alone and thinking’ and ‘how do you stop when you’ve started//Loving a sinking feeling’ are more likely to be felt viscerally by the emotive music fan and in fact a line like ‘crazy can be comfortable, but baby, that don’t make it right’ is more pertinent to today’s adolescent generation.

LP’s talent has been noticed by many. That Muddy Waters video is now at 124 million views, while LP’s songwriting has been deemed worthy of the likes of legends Cher, Rihanna, Leona Lewis, Christina Aguilera and Celine Dion. One can only hope and assume that many more music fans will discover this incredible singing and songwriting talent following the release of sixth album Churches.