Canada has provided a plethora of iconic artists over the years; Celine Dion, Michael Bublé, Bryan Adams, Shania Twain, Drake and Avril Lavigne to name just a very few. Putting her own pin on the Canadian musical map is electro-pop hitmaker, Lights who first came to prominence back in 2009 with her stellar debut album, The Listening; a synthpop masterpiece that was much more fitting and appreciated within the British pop landscape than it ever was in the singer’s homeland or the US. 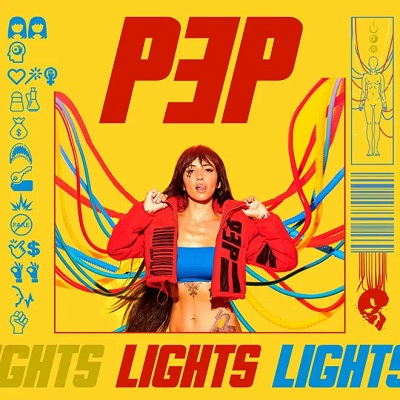 It was way back with The Listening that we fell in total love with this pint-sized songbird that hypnotized us with keytar hits like Drive My Soul, Saviour and elecro-pop earworm, Second Go. With this release we were also introduced to a musician who delivered epic live sets, after seeing her perform live in London a handful of times supporting The Listening and follow up studio release, Siberia. Now it’s time for the next Lights era as she releases new album, PEP – 3 years after the release of her last studio record, and it’s certainly been well worth the wait.

A captivating hum of synths cracks the pop lid of PED with opening track, Beside Myself. It’s crescendo of keys create a euphoric opening; rich with Lights’ stunning and seasoned vocals as the track lifts off from its mellow birthing into a punchy, U2 meets Coldplay-esque beauty. The perfect introduction to PEP!

Fans of Lights’ previous records will find many toys in this PEP pop playground to add to their ‘Lights Favs’ playlists; bouncy confection comes in the form of album lead single In My Head and is quickly a classic Lights hit, while Jaws and Easy Money delicately tease our sweet tooth with their distinctively catchy Lights melodies – both worthy future singles.

It’s not all about the up-tempo with Lights though as we have heard on previous albums with tracks like Drive My Soul being the perfect example. The singer can just as capably turn out a powerful and emotive ballad as she can a dancefloor toe-tapper as heard on album highlights Rent, with its descriptions of love as living arrangements, and album closer, Grip offering a stadium suited synthpop gem, complete with 80′ keys taken right out of the Stranger Things or The Weeknd playbooks.

PEP is an unapologetic pop record that delivers by the sparkly spade-full and is delivered in more similar style to the singers earlier records than later releases so while early fans of the Canadian will find more here to sink their teeth into than new fans perhaps, we are fairly certain that PEP will also be successful in seducing a new generation of fans with its very relevant and catchy take on electro-pop that the singer has long since mastered in her time brightening the pop-scene with her brand of playful pop. This is an album brimming with witty lyricism and feel-good melodies that have one leg in current, mainstream electro-rock and one leg in nostalgic synthpop – connecting to an already impressive body of work.