Starsailor’s much-anticipated Love is Here 20th Anniversary UK Tour will resume in September when fans will be able to see the band perform their debut album in its entirety. The tour features five rescheduled shows from 2021 alongside 10 brand new shows. Tickets for all new shows will go on sale at 9am on Friday 4 March via www.gigsandtours.com and www.ticketmaster.co.uk.

Starsailor burst onto the scene in February 2001 when their single Fever earned them the title of “Britain’s best new band”. Their second single, “Good Souls”, reached the Top 20, and “Alcoholic” earned the band their first UK Top 10 hit. Their debut album ‘Love is Here’ followed soon after and reached Number Two in the UK Album Charts in October 2001 to great critical acclaim.

Starsailor formed at Wigan and Leigh Music College by music students James Walsh (vocals/guitar), James Stelfox (bass), and Ben Byrne (drums). Later saw the arrival of keyboardist Barry Westhead, who cemented their sound. In April 2000, after seeing their first London show (at the Heavenly Social) the NME wrote: “One live encounter was enough to convince many sceptics that here was a band who were genuinely special, blessed with a singer whose voice thrummed like an emotional telegraph wire, that swerved the pitfalls of indie melancholia and were clearly in love with rock ‘n’ roll and all its possibilities.”

Starsailor continued with this budding success through their second album Silence Is Easy, which featured production from John Leckie (The Stone Roses, Radiohead), Danton Supple (Elbow, Doves) and Phil Spector (John Lennon, George Harrison). Silence Is Easy sold over 54,000 copies within a week and reached number 2 in the UK album charts. It also includes three of the band’s biggest hits ‘Silence Is Easy’, ‘Born Again’ and ‘Four To The Floor’ – the title track remaining they’re most successful single to date. The group relocated to Los Angeles to record their third album, On the Outside and All The Plans which both received favourable reviews and acclaim across the board. The band have also enjoyed more than their fair share of prestigious gigs, supporting the likes of The Rolling Stones, The Police, The Killers, and U2, and have sold over 3 million albums worldwide.

Starsailor will be touring across Europe (their first since 2017) and will appear at festivals this summer including Neighbourhood Weekender in Warrington before continuing their Love is here tour in September. Tickets will be on sale this Friday at 9am via www.gigsandtours.com / www.ticketmaster.co.uk. Original tickets for the five 2021 postponed shows – London, Manchester (now taking place at the O2 Ritz), Birmingham, Leeds and Newcastle – will remain valid for the rescheduled dates.

Starsailor said: ‘We’re very pleased to announce we’ll be back on the road this September with the ‘Love Is Here’ anniversary tour. Thanks for your patience while we organised the rescheduled dates.’ 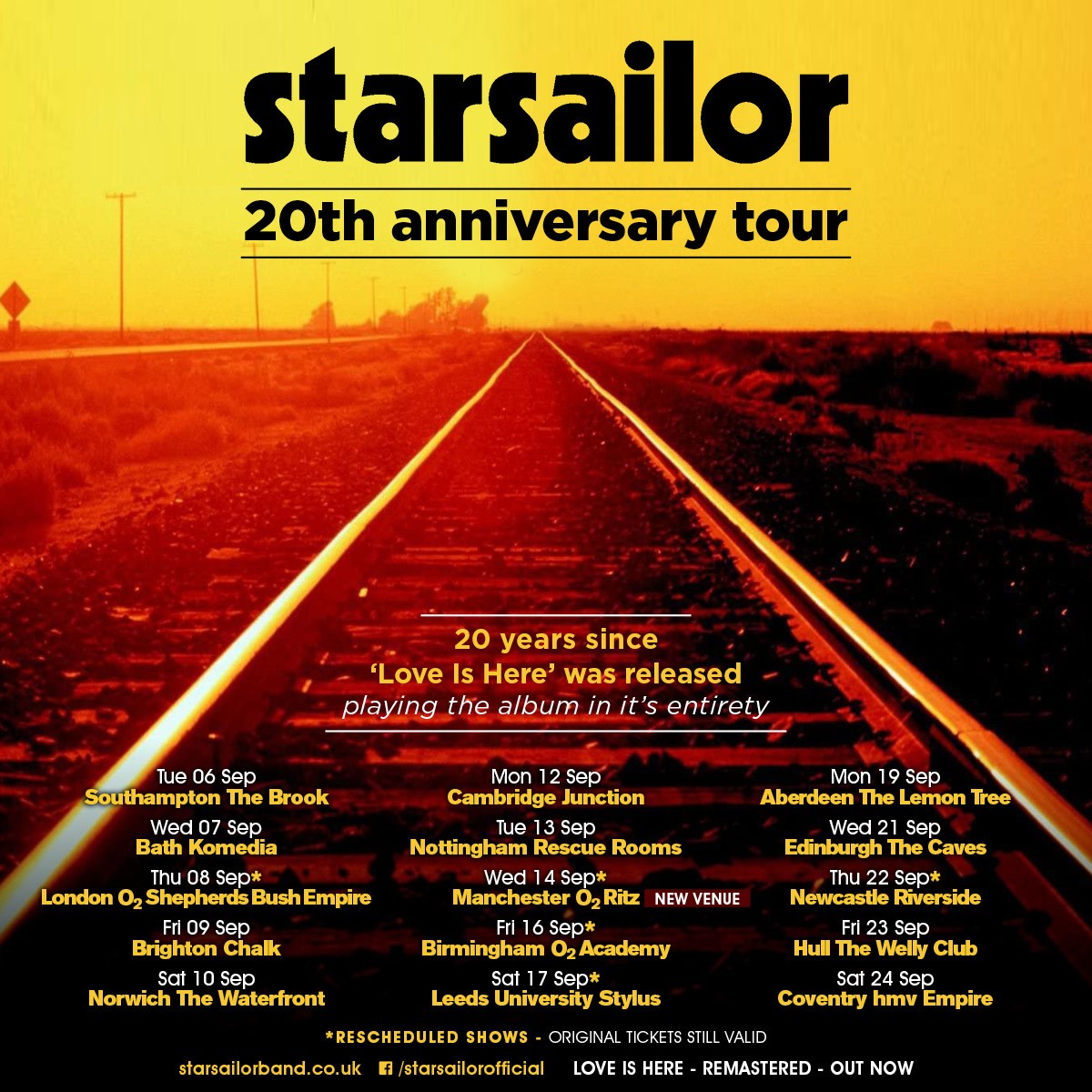