It’s been a tough 18 months. Actually…let me rephrase that: It’s been a monumentally horrific 18 months. With the world only recently coming out of lockdowns and restrictions that have stopped us from enjoying the more fun elements of life, live entertainment made its celebrated return with the doors of UK music venues being flung open to welcome fans across the wide entertainment spectrum. Though for how long that will last is yet to be seen with restrictions starting to tighten again. However, since the reopening of venues we have taken full advantage of the return of shows in London and have been regular concert goers at Renowned For Sound; being the live music aficionados that we have always been. There have been certain shows however, that we have been particularly eager to come around on the calendar and within that list is pop juggernauts, Steps.

The pop quintet made lockdown more bearable with the release of two solid albums in the space of 12 months in the shape of What The Future Holds Part 1 and Part 2. Their latest UK tour to support those releases started its glittery engines earlier this month and has been gradually making its triumphant way south with London’s world famous O2 Arena providing the backdrop to the outfits arena tour this past weekend with two sold out shows at the iconic venue.

Check out our September 2021 interview with Steps here.

The tour certainly hasn’t been without its challenges so far with Faye Tozer being forced to miss a string of dates due to testing positive for Covid; watching the tour continue from the side-lines as they turn out the hits to fans in her absence. However, we were ecstatic to see her return at Saturday’s show; a smile beaming from ear to ear as she found her place back on stage with her band mates for the second of the two mammoth shows. But as one returned another unfortunately fell with Lee testing positive before the show and being forced to not just miss the second O2 date, but the remaining dates of the What The Future Holds tour. And, as we write this review, news that further positive results within the touring camp have been announced, resulting in the remaining two dates of the tour being postponed to 2022.  But, in a Covid world where nothing is certain, it doesn’t seem like too much of a surprise that setbacks like this have occurred.

As 20:15 rolled around and the venue quickly filled with fans of all ages; a giant timer overhead lit up: 15:00 and counting down; the crowd becoming visibly more and more excited as they started to sing along as loudly as possible in their sequined tops or Better The Devil You Know inspired horns to warm up pop hits from Spice Girls and Girls Aloud. As the timer lowered and the beams of light started to shine throughout the venue, the band emerged to deliver a spectacular performance of tour and album title track, What The Future Holds to an almost deafening response to fans that have helped get the band’s latest records to the #2 position in the charts.

From the futuristic pop banger, the group led us into early balladry with One For Sorrow; a track usually left to close out shows within the encore segment. Always one to leave fans in awe with her flawless vocals, Claire truly delivered as she poured her heart and soul into belting out the bands signature slow burner to a pop hungry sold out O2 crowd as the band positioned themselves on the raised stage structure like glittering mantle pieces above backing dancers who captivated the crowd with a hypnotic scene on the floor level of the stage. 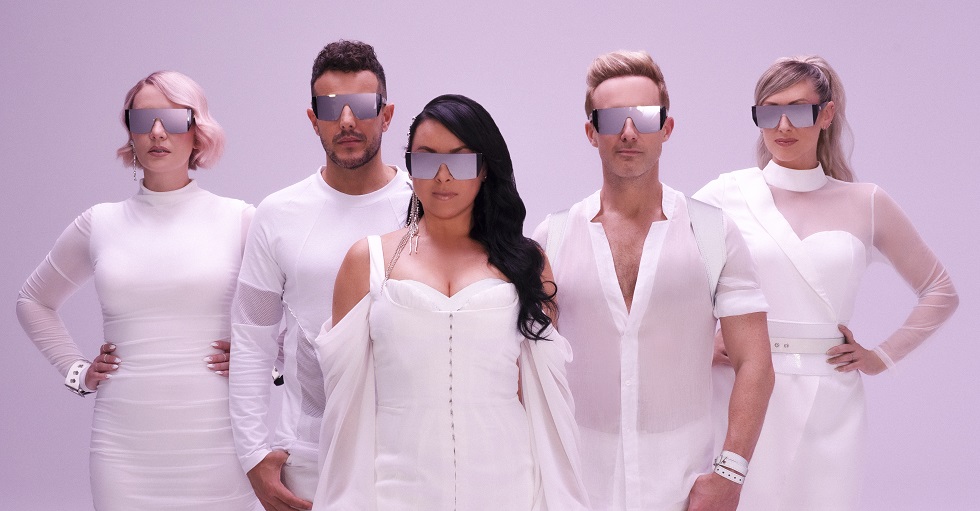 The band’s latest records were given further attention in the first half of the show with Heartbreak In This City and Take Me For A Ride making early appearances; and RuPaul’s Drag Race judge and single collaborator, Michelle Visage making an appearance on the giant screens overhead for the former single hit. Further into the show we were also given an electric performance of Five Star cover, The Slightest Touch; the entire arena glowing in red as the overhead screens displayed club-inspired visuals of the band.

The set for the night was played out with a past, present and future theme; the timer taking us back in time for a period-inspired It’s the Way You Make Me Feel while vintage inspired black and white videos of each band member performing a solo 60’s or 70’s hit provided the band with an interlude in the show to have a quick costume change in time for a mash up of first single, 5,6,7,8 with 90’s favorite, Groove Is In The Heart which led perfectly into a rapid fire performance of Something In Your Eyes. With Lee not being present for the former early Steps hit, Faye requested the crowd help them with the number as lyrics to the verses of the song appeared in karaoke style on the large screens above.

New single A Hundred Years Of Winter, a track written for the band by Savage Garden hitmaker, Darren Hayes previously gave the boys a moment to share the vocal spotlight but with Lee’s absence the ladies helped propel the ballad along in the centre of the set before a sweet acapalla opening for Last Thing On My Mind had the audience soaking up the nostalgia and doing their best to mimic the dance moves being turned out by the four-piece.

Check out our November 2020 interview with Steps here.

As with most tours, there were obvious favorites and scene stealers within the show; their cover of Diana Ross hit, Chain Reaction always a winner as was the groups exceptional cover of Kylie Minogue floor filler, Better The Devil You Know; all getting the thousands of fans that snapped up tickets to this spectacle further reason to shake off the working week and dance with their favorite pop idols.

As if the plethora of hits already dished up wasn’t enough, the band closed the main set with debut album gem, Better Best Forgotten and a full throttle rendition of Steptacular showpiece, Deeper Shade Of Blue before returning to deliver a memorable encore made up of Here and Now, Scared of the Dark and the obvious but always camp and glitzy, Tragedy closing the show with a level of flamboyance that only this golden pop group Goliath are capable of.

It’s incredible to think of the career steps have had and just how many hits they have managed to rack up over the course of almost 25 years – a milestone the group will be celebrating next year with last weeks announcement of a brand-new summer tour in the UK. But, with the show the band have put together for this latest stomp around UK cities, the fuel tank is nowhere near running dry anytime soon and we can’t wait to get back out and see this pop machine perform their hits once again!

Setlist:
What the Future Holds
One for Sorrow
Heartbreak in This City
Neon Blue
Take Me for a Ride
Baby Love / It’s Not Unusual / Son of a Preacher Man / Wild Thing / You’re My World (interlude)
5, 6, 7, 8
After the Love Has Gone
Something in Your Eyes
Say You’ll Be Mine
Chain Reaction
Story of a Heart
It’s the Way You Make Me Feel
The Slightest Touch
A Hundred Years of Winter
Last Thing on My Mind
Stomp
Heartbeat
To the Beat of My Heart
Better the Devil You Know
Love’s Got a Hold on My Heart
Summer of Love
Better Best Forgotten
Deeper Shade of Blue

Encore:
Here and Now
Scared of the Dark
Tragedy