When we talk about the varied and long history of wars, there are so many great ones to choose from; the Trojan Wars being one of my favourites, BBC2’s Robot Wars with the mechanical savage Sergeant Bash, and also the personal war I’m currently having with my elderly neighbour Gladys over her bins. However, after listening to I Don’t Live Here Anymore, there is only one war I care about, and that is (yes, you guessed it), the War on Drugs. 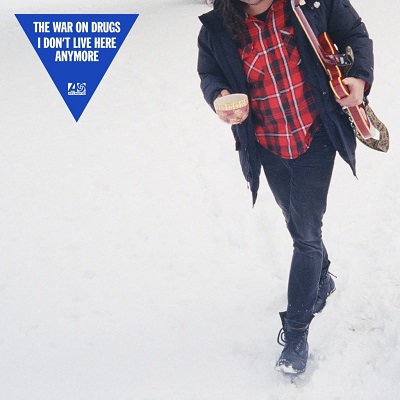 It has been a transformative few years for the War on Drugs frontman Adam Granduciel; he became a father for the first time in 2019, the bands previous LP, 2017’s A Deeper Understanding made the US Top 10 and picked up a Grammy Award for Best Rock Album. The success of the album propelled the synth-rock artists into selling out stadiums, spreading their brand of meditative Americana to thousands every night. With the band’s fifth album, I Don’t Live Here Anymore, Granduciel and co. have released a deeply spiritual album filled with stadium-sized ethereal melodies over profoundly personal lyrics.

The long intros and undecipherable lyrics of their 2014 breakthrough LP Lost in the Dream have been replaced with a desire to write simple, candid songs. Their signature cosy synths and flooding guitars, layered over a steady backbeat are still present but it is a much more accessible concept. The sound of I Don’t Live Here Anymore is acutely expansive, mixing in a euphoric nature that immerses the listener from start to finish.

The album opens with Living Proof, a beautifully sung, warm ballad that slowly builds from a whimper to a whisper. It is an emotional, reflective track about not being able to go home, about the importance of moving forward: “I’ve been to the place / That you’ve tried escaping / I can’t recall / What I believe in / I’m always changing / Love overflowing.” Granduciel is on a journey of self-discovery, lyrically he has never been more poetic. Harmonia’s Dream and Change still emphasise the bands effectiveness at pop hooks and simple pop melodies however they carry a more descriptive feel. The sounds created are textually and organically atmospheric in their world building.

The title track I Don’t Live Here Anymore feels luxurious in its ambience. The harmonies that echo throughout, the softness of the repetitive melody, the ringing of guitars that create a bright vacuum for the listener. It is what makes the War on Drugs acutely necessary. The track borrows heavily from Springsteen and Petty; it does not flat-out steal their sound but it fits nicely into their solar system. Much like the lyrical honesty of Springsteen; Granduciel has developed immensely as a songwriter. The closing track Occasional Rain features sentences that would make the Boss proud: “I got swept up in a world so strange / One you’d never even recognise / Oh, but I slipped away / Now I’m a stranger and I don’t know why.” The three years between albums has replaced Granduciel’s abstract style with a more absorbing and welcoming narrative.

The record is ultimately about change, about growing and using the past to move forward. The track listing creates a landscape of continuous motion, of pulsating beats that propel us further. Old Skin begins with a gentle, astrological sound that grows louder and louder, as Granduciel leads us on an intimate hike that ends with wailing Springsteen harmonica (it’s no wonder he called his son Bruce). Wasted feels like pure stadium rock with vivacious guitars, keyboards and drums all circulating harmoniously with one another. The mesmerising sounds make up a vintage atmosphere that is felt throughout every second of the album. It is truly an inspiring listen.