Much like Laurence Llewelyn-Bowen’s hairstyle, Stereophonics are not a fan of change. Their new album Oochya! avoids any hints of shock and awe in favour of playing it safe, with fifteen tracks that fall snugly within the Welsh band’s llyfr rheolau (that’s the Welsh word for rulebook). 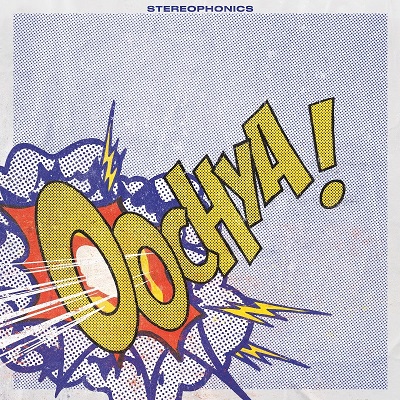 It’s been twenty-five years since the release of their debut album Word Gets Around, and to mark this historic feat, Kelly Jones and the boys were set to release a second greatest hits collection. But during the preparation of the record, their plans changed. “We’ve always been about trying to find new audiences with new music, and it started to feel like a compilation was too easy.” Whilst rummaging through their archives, frontman Jones found several unused songs that told the story of Stereophonics much better than any collection could.

Mixing the old with the new, the Stereophonics remixed their recently discovered tracks and alongside some newly penned songs, meshed together a double album that feels as Stereophonicky as Jones sitting on a stool in the black and white Handbags and Gladrags video. Hearing recent songs as well as past efforts on one record, we can see stylistically not much has changed, rather the band have added to and twisted their original sound. Their scratchy aura was immediate.

The album title Oochya! originates from a saying used in the studio, meaning “let’s have it!” This battle cry resonates perfectly on the lead single Hanging On Your Hinges that kicks off the album. Coming in at under three minutes; the thumping, raucous energy of the track wouldn’t feel out of place in a garage with the door open for all to hear. It’s friends having fun, going back to their younger years, relishing in the messiness of the music they are making.

What follows is Forever, a song that was originally the b-side to 2008’s You’re My Star. It’s no surprise that Forever has all the trademarks of their early offerings, with a soaring gentle chorus that is complemented by Jones’s laid-back raspy vocals. It explores escapism with an electronic soundscape that builds and builds, echoing the lyrics it surrounds “Wish I could fly away forever / I wish I could take your pain for you and release you.” It’s one of the better ballads on the album. Sharing its sensibilities is Seen That Look Before, a towering, powerful effort that depicts the good-natured energy of seventies Americana.

The second single Do Ya Feel My Love? is quintessential Stereophonics. It’s an angry, volatile, sonically charged effort with all members on top form. Its feel is off-balanced, it demands your attention. The multiple guitar lines assault one another as Jones’s rough snarls enrapture its atmosphere. Its unrelenting enthusiasm stands above the majority of Oochya! Tracks such as You’re My Soul and Jack in a Box are average offerings that seem more filler-than-killer. It’s easy to think if the Welsh rockers would have removed a few tracks from the fifteen tracklistings, they might have a tighter sounding record on their hands.

That’s not to say the rest of the songs are average; Running Round My Brain is a homage to Jones’s heroes AC/DC, with its sustained chords and licks that pierce the ears, it’s easy to feel the frontman’s love for the band. The biographical themes continue in the sentimental Close Enough to Drive Home, a tender number about love at a distance. Whilst Right Place Right Time delves into the band’s history: “You got drums, I got a guitar / And we made up a band who knew we’d go far.” It has a sweet, relaxing feel with one imaging Jones sitting in a rocking chair telling the story of the band.

Oochya! is a celebration of Stereophonics twenty-five year history. By revamping the new “old” tracks, the four-piece have painted a picture of their musical past rather than a mere copy. For fans, this will be a welcome addition to their discography, and although they haven’t experimented with their sound in the record, it’s their recognisability that people enjoy.