Red Hot Chili Peppers get the band back together for their unique blend of funk-rock Californication.

With the return of guitarist John Frusciante and barefoot super-producer Rick Rubin, Red Hot Chili Peppers have recaptured their psychedelic-funk spark. From their early years of performing naked with only a sock covering their chili peppers, to their laid-back California-surf sound of today, the Chili Peppers 12th studio album is the quartet more balanced than ever. 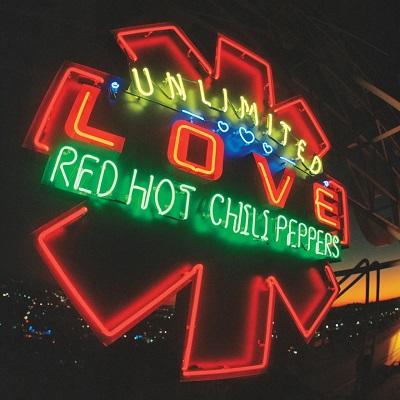 Listening to Unlimited Love feels like slipping on your favourite pair of socks (onto your feet, not how these scamps do it). Hearing Frusciante’s water-like guitar work and bewitching harmonies transport you back to Blood Sugar Sex Magik and Californication. The key to the Chili Peppers sound is its four members – Anthony Kiedis, Flea, Chad Smith, and Frusciante. If one is missing, their sound is missing. As Frusciante said of Unlimited Love – “for me, this record represents our love for, and faith in, each other.” With the classic line-up revived, the band feel rejuvenated, restored, as if the guitarist’s sixteen-year absence never happened.

As with all bands and musicians, the problem with ageing remains the same. Do you change with the popular music around you, or do you stick to your guns, pleasing the majority of your fanbase but losing any chance of a new one? Only a select few can adjust, Bowie, being one of them, Prince being another. The Chili Peppers are hard to fit into either box. Their brand of funk-metal mixed with surf-rap gave them a signature and unique sound. Which meant that changing with the times wasn’t possible as they never sounded mainstream to begin with.

When Frusciante left for the second time in 2006, the Chili Peppers replaced him with newcomer Josh Klinghoffer. What resulted was two critically acclaimed albums that veered into experimental territory. Now Frusciante is back, it’s as if his exit never happened. They sound as comfortable as ever in the lead single and opening track Black Summer. With its atmospheric and ethereal build, the track fits nicely alongside classics such as Scar Tissue and By The Way. It’s fitting that this is the first song the guitarist wrote for Unlimited Love as his heartbeat is felt throughout.

Their natural camaraderie is captured instantly, feeling like an intimate look at a jam session with four BFFs. Kiedis’ lyrics have always been cartoonish. His meanings purposely lost in favour of flow. It’s a stream-of-consciousness style that means nothing yet means everything to their energy. He’s not so much a lyricist as he is another instrument. Aquatic Mouth Dance is a perfect example of this. It’s vintage Chili Peppers – fun, raw, and opens with a bass solo that feels like a rocket counting down to funk lift-off. A cinematic landscape full of sound effects and pulsating feels. It ends with a chaotic outro which, by all means, should feel like an assault, but it’s so enigmatic it’s more like a gentle mugging.

Flea’s exceptional bass playing continues on Poster Child. A laid-back groove with spoken-word verses that name checks everyone from Adam Ant to Caddyshack. The musical backdrop is slick and meditative, with luscious harmonies and psychedelic guitar licks throughout. It’s a slow jam with a captivating atmosphere that fills the room. The Great Apes is Frusciante exploring his electronic pastures with rage and confidence. His tone is kaleidoscopic, shifting from sweet to threatening in an instance. He engulfs the song, to the point where the other members feel like his backing band, and it’s all the better for it.

She’s a Lover is a 70’s inspired funk throwback. It overhauls itself with tender harmonies and a majestic bass part from Flea. Whatchu Thinkin’ is a minimalistic groove with lead guitar that carries us swimmingly into the chorus. Flea and drummer Chad Smith feel more in sync than ever, each propelling and carrying the other further. White Braids & Pillow Chair is lovely from start to finish. Witnessing Frusciante’s celestial vocals backing Kiedis throughout is a pure delicacy. The song moves along at a lazy Sunday morning pace and is intoxicating in its niceties. It ends with a more manic twang, forcing the ‘60s surf music to climax in a chase. It’s a standout on the seventeen track album.

Another standout is The Heavy Wing, a nearly six-minute epic with Hendrix-inspired velocity and mood changes that jump-start our wires. With a guitar that punctures like a freight train and a wailing chorus sung exclusively by Frusciante, the song owes more to the guitarist’s solo endeavors and his thrilling creativity. The Heavy Wing is each member performing at their best – Smith’s drums nailing the time changes, Flea forcing the song where it needs to go, Kiedis vocals enigmatically building and building, giving way to Frusciante to take the lead.

Ultimately, this is the theme of Unlimited Love. It’s a band performing together, knowing when to take the spotlight and when to let others shine. With Frusciante back, the album was in danger of being sentimental. Thankfully, that doesn’t happen. It’s four friends doing what they do best. Pure. Unadulterated. Funk. Magik.