Almost 3 years after the passing of one of pop music’s most loved artists, fans of Swedish pop duo, Roxette, are finally gifted with a brand-new record from the Per Gessle camp. A woman of unwavering talent and a voice as iconic as the genre she reigned supreme, Marie Fredriksson helped make Roxette one of the most successful acts of the 80’s and 90’s with hits like It Must Have Been Love, Spending My Time, Fading Like A Flower and Listen To Your Heart before her passing in December of 2019 following a long and brave battle with cancer. Thankfully Gessle, the principal songwriting force behind all of Roxette’s recordings, wasn’t content in letting the Roxette name fade out and decided to continue under the moniker of PG Roxette; enlisting the extended Roxette family (including singers Helena Josefsson and Dea Norberg) to continue the band in Fredriksson’s memory and the first album release since Marie’s passing was released over the last few days in the form of Pop-Up Dynamo. 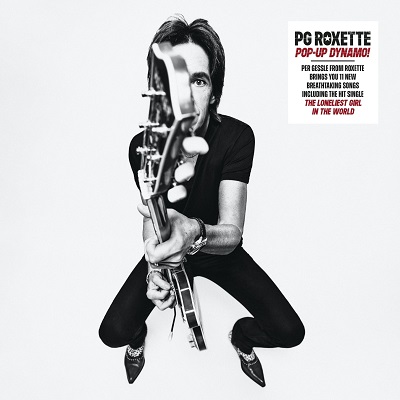 As an original Roxer, I admittedly went into Pop-Up Dynamo with trepidation. Like any fan who attributes their musical tastes or devotes themselves to a band, it is the same with Roxers and the work of Per and Marie: we find ourselves very protective of the brand and output under the Roxette banner, and without Fredriksson at the mic on the majority of songs, an element of skepticism was always going to be present over this project. However, after a weekend spent digesting the record to its fullest extent, it’s safe to say that any worries I had about the Roxette brand diminishing without Marie have been settled. While she may not be present on the record, there is a familiar Fredriksson presence throughout many of these tracks. You could almost hear how the late singer would have sounded on some of these songs; and that is true testament to Gessle’s approach to writing and producing these new numbers.

From the cool 80’s synths that crack the lid on the record throughout opener, Walking On Air listeners are immediately reminded of the songwriting genius of the 63 year old Swede who is still going as strong as any pop twenty-something in his field. The signature hooks that are symbolic of Gessle’s writing are present throughout Walking On Air and most tracks on Pop-Up Dynamo.

Me and You and Everything In Between follows and is one of the highlights of Pop-Up Dynamo; Josefsson again leading the chorus line with her light, dreamy and almost child-like vocals while Gessle’s clear fascination with interactions on buses pops up again (I’m looking at you The Loneliest Girl In The World and Mono Mind’s Stranger On A Bus to name a couple of most recent nods). It’s almost experimental sounding instrumentation makes the track a light affair and would serve the record well as a possible future single with its instant earworm qualities.

Headphones takes us right back to the late 80’s and is another single sounding hit on the record. A bouncy vocal bridge accelerates into one of the albums catchiest hook-laden choruses. The production is kept light on the track while some impressive guitar work injects a raw, steely backbone to the track’s dreamy chorus.

While the opening of the album ushers us right into Gessle’s up-tempo songwriting skills, tracks like You Hurt The One The Most take us back to the early Pearls of Passion songwriting days – hinting at bold ballads like So Far Away and Surrender but Watch Me Come Undone is the records ballad centerpiece – a flowing, whispery vocal that remind us of a cross between Speak To Me from 2011’s Charm School and the dreampop approach of Nelly Furtado’s All Good Things (Come To An End). There is even a bit of slide guitar hidden into the tracks instrumentation – something Gessle has a developed a fondness for throughout his solo records.

The Craziest Thing gets the momentum of Pop-Up Dynamo back on a high with its Pet Shop Boys meets Kylie Minogue meets Mortal Kombat instrumentation and discotheque setting before Debris gives off very dramatic, almost Cooper (from 1999’s Have A Nice Day)-esque vibes.

Several months before the release of Pop-Up Dynamo we were offered our first slice of what’s to come with lead single The Loneliest Girl In The World which nestles perfectly into the latter half of Pop-Up Dynamo. The track carries on from the punchy vibes first started on Walking On Air and the position of the single within the record helps make the album feel even more cohesive; whirling synths propelling the catchy lead single that carried a lot of weight for this first venture for Gessle as PG Roxette. It’s yet another infectious pop gem for Gessle and the perfect introduction to this next Gessle career chapter.

Following suit of Debris in terms of its poetic storytelling, but on a much more somber note, Jezebel is a pretty addition to the tracklisting; a piano tinkering guiding Josefsson’s delicate vocals through a whimsical storytelling of wishing wells, gardens and cherry trees.

My Chosen One sees an extremely rare collaboration take place as Gessle invites Swedish singer Leon onto the album, providing a haunting guest vocal to the chorus. While I personally have never heard of Leon, the perfectly cast and quite chilling vocals inject something very unique into the track and into the album as a whole while Giorgio Moroder sounds very present on the closing Walk Right In. Beginning as a sweet slow-burner, the track quickly transforms into a disco-inspired Blondie/Donna Summer toe-tapper; a memorable closing to the record.

The decision to release Pop-Up Dynamo under the Roxette name is a courageous one! After all, how do you continue to sell a world-famous brand without one of its most cherished, iconic, and symbolic mascots? I can only imagine how difficult and scary that decision must have been for Gessle. The approach to this release has therefore been, understandably, very sensitive; this is a dedicated release to the late singer, and the first using the Roxette name without her since her passing. I’m sure she would have been proud of the new songs Gessle has produced here. She may be gone, but she will always be within the very fabric of the Roxette name and the incredible legacy that she helped build and that will continue, hopefully for many years to come.