The Willy Wonka of rock n’ roll’s first of two 2022 offerings is bold, brash, and bonkers. Fear of the Dawn sits nicely in the curiosity shop, with songs that feel at home in the peculiar.

Currently, there isn’t a more creative man in rock than Jack White. Founder of the independent record label Third Man Records and its three physical locations that span across Nashville, Detroit, and London, White has established himself as the goth Mr. Selfridge. The stores are all overseen by his watchful eye, from the colour schemes to the unique novelties that line their shelves, the Nashville-based impresario is in full creative control. 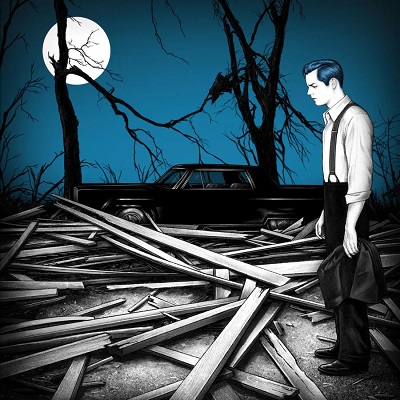 Originality is important to White. From his early years as an upholsterer in Detroit, where he would leave hidden messages inside furniture for other upholsterers to find, to the simplicity of The White Stripes aesthetic. The frontman wears the moniker of “mad genius” well. It’s what shapes his relentless creativity and avant-garde approach to music. Never one to stagnate, the garage rock advocate is back with new hair and a new approach to recording.

Gone are the simple days of Jack and Meg recording The White Stripes and their follow-up De Stijl LPs with only drums and guitar. Fear of the Dawn is an album full of ADHD and overdubs. And it’s loud. Really loud. It explodes out of the speakers. Relentless and unnerving. It’s as if White has used every tool in his toolbox. From samples of American beat writers to riffs upon riffs upon riffs. The innovator is having fun, finding his enthusiasm again. It’s a pure frenzied listen, and I love it.

The Detroit native has taken the phrase “fine, I’ll do it myself,” and adopted it as his own. Playing the majority of the instruments himself, Fear of the Dawn is entirely the garage bluesman’s vision. The album opens with the industrially manic Taking Me Back. From its aggressive fuzz-tone guitars to his combative multi-tracked vocals, the song is an invasion of sound. Heavy guitars build and build as swirling sound effects pierce our ears. White screeches his divorce-inspired lyrics over pulsating drum beats and sonic eclipses. It’s the singer-songwriter making a statement, and it’s a ferocious one.

What follows is the two-minute title track, and it’s full of intensity and chaos. From squawking sound effects to dive-bombing theremin barrages, the track is feverish from start to finish. The lyrics “when the moon is above you / does it tell you “I love you” by screaming?” trigger an irrational fear of daylight that seeps into the album. Even with its short runtime, the title track acts as a shot of adrenaline. The at home in the darkness theme is found in the tracks Eosophobia and Eosophobia (Reprise) which literally translates to a morbid fear of dawn or daylight. If White’s intension was to release a record full of anxious euphoria, then he succeeded.

This would explain White’s current vampiristic aesthetic – his pale skin (paler than usual) and blue hair (as if touched by moonlight). The inventive appeal of the opening tracks can be felt in the single Hi-De-Ho, which features rapper Q-Tip (formerly of the hip hop group A Tribe Called Quest). The song answers the question “what if Tim Burton did hip hop?” It stretches and loops Cab Calloway’s Hi-De-Ho-Man as Q-Tip freestyles and White layers over operatic vocals. It’s atmospheric and brilliant. White has always been a fan of hip hop, and this collaboration plays to both the artist’s strengths. With cool bass lines and drum beats that vibrate throughout, Hi-De-Ho is a creepy “headonic” jam.

Into the Twilight carries on the hip hop flow. It showcases White’s “cut and paste” genius as he intertwines an array of harmonies, guitar licks, William S. Burroughs speeches, sound effects, and hurdling drum beats that create a juggernaut of sound. It won’t be to everyone’s taste, but I found it electrifying. Another stand-out is the third single What’s the Trick, a dynamic take on garage rock/rap with White rapping over a Ballade de Melody Nelson inspired bass line. It’s an unstable and hypnotic listen that resembles a sped-up, steroid-infused Ball and Biscuit.

Fear of the Dawn is intense and unique. Capturing a stream of consciousness style that not only infiltrates lyrically but also instrumentally. The album is hysterical, experimental, and sonically brilliant. It’s Jack White returning to the man he once was… the saviour of rock n’ roll.