Florence Welsh’s lockdown album is her most personal yet. Her fierce introspection is full of sincerity, honesty, and vulnerability. It’s a collection of songs that wouldn’t feel out of place sat next to the great Maury Povich. 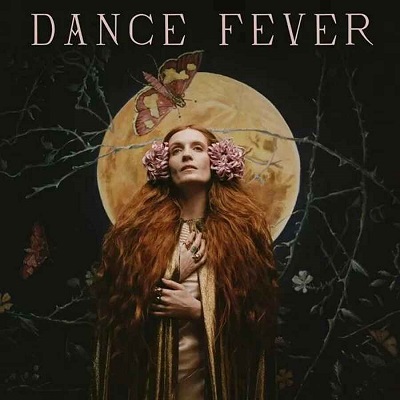 The album opens with the lyrics “We argue in the kitchen about whether to have children.” Welsh’s bluntness about her relationship makes us feel uneasy and enthralled from the get-go. Dance Fever has these powerful moments intertwined throughout, it’s what makes the band’s fifth album so relatable and impressive. Welsh has used her time over the pandemic to voice artistic frustrations as well as societal frustrations. It’s her internal struggle with the external world, immersed in the band’s euphoric instrumentation.

Welsh described Dance Fever as “a fairy tale in fourteen songs.” Its narrative contains heroes and villains, morals and obstacles, and even ends with a somewhat happy ending.  The band’s first album in four years sees Welsh battling helplessness through sheer determination. The lead singer’s power has always come from her emotional and titanic voice. At times it can be subdued and at others atomic, but it’s always the band’s most powerful instrument. And Dance Fever sees Welsh battling with her gift.

In the album’s opener, King depicts Welsh deciding between pursuing her artistic desires and pursuing motherhood. The songstress finds frustration in her idols such as Nick Cave and Leonard Cohen who never have to make a choice: “I am no mother, I am no bride, I am King.” Her idols can continue living for the stage whereas Welsh feels guilt over choosing performance. Welsh confesses her identity has always been as an artist on par with her male counterparts, but she now realizes there’s a difference. There’s a divide between the singer and her idols reflected in Welsh’s animalistic and exasperated scream in the song’s middle.

The idea of self-interrogation continues throughout Dance Fever. Welsh describes the album as “Lungs with more self-knowledge.” It’s full of desires and stark admissions that distance itself from its previous offerings. The LP still features the band’s distinctive foaming-at-the-mouth rhythmic production that pierces and hammers the listener with every strum. Choreomania reveals this ticking time bomb sonically. The song builds from delicacy to brutality with ease over its three and a half minutes run-time. It’s a wonderful achievement that feels ambitious and fierce. It’s the band at their very best.

Welsh had intended to build the album around the concept of Choreomania; the Renaissance phenomenon is known as the “dancing plague.” It’s an affliction that sees those affected flailing and twitching until they have reached exhaustion or death. The fantastic film Midsommar portrays something similar. Welsh had become obsessed with this concept as she saw it as a psychological response to your surroundings. She noted how the deaths of the “dancing plague” could be brought on by the need to escape. Welsh herself used dance as escapism from lockdown: “Something’s coming / So out of breath / I just kept spinning / And I danced myself to death.” The track escalates and escalates until an abrupt stop, depicting the eerie presence of her fever.

Candid reflection can be felt throughout Dance Fever. The Maggie Rogers assisted track Girls Against God opens with the lines: “What a thing to admit / That when someone looks at me with real love / I don’t like it very much.” It’s a form of honesty that is absent from today’s music sphere. Welsh’s self-analysis gives strength to the millions who feel the same. Dream Girl Evil (again with vocals from Rogers) is full-on liberation. A song cornering the relentless expectations society places on women. Its large soundscape resembles a thunderous quarrel with Welsh leading the charge: “Did I disappoint you? / Did mummy make you sad? / Do I just remind you / Of every girl that made you mad?”

The album closes with tracks The Bomb and Morning Elvis. The Bomb centres on Welsh finding love with someone who only reciprocates when she is unavailable. It’s a soft and mellow depiction of a relationship built on moments. Shuffling along romantically with gentle guitar, warm strings, and angelic harmonies. It stops and starts with violent full stops that resemble a melodic bombing. Morning Elvis closes the album with a song about sobriety. It reveals how her idols take their demons and turn them into anthems. It’s another delicate subject that Walsh turns into profound artistry. The lyrics find her reaching for the heights of Graceland but falling short. Discovering it’s the stage where she belongs as the LP ends with the sound of crowds cheering.

Dance Fever began as an album about Choreomania (hence the title) but ended with a depiction of chilling self-reflection.  Welsh and the band created an honest, vital, and theatrical depiction of growing older. Its powerful uncertainty and realizations add to the majestic and spiritual nature of the album. With Dance Fever, Florence + The Machine keep getting better and better.