Things weren’t looking good for classic rock band Def Leppard during the pandemic, as they saw their North American ‘Stadium Tour’ with Joan Jett, Poison and Mötley Crüe put on hold till 2021, then again till 2022 as lockdown prevented the Sheffield heavyweights from rocking US stages once again. However, the tour is now underway and as good as ever, along with a new album release from the band. 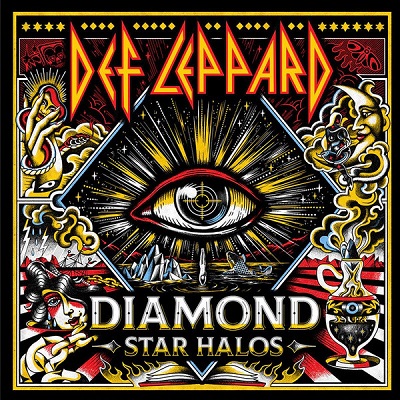 It takes less than one minute into the first track, Take What You Want, for our ears to be greeted welcomingly with a stonking guitar riff, tuned down to let the snarling overdrive of Phil Collen’s guitar sound dirtier than ever. The driving drum beat powers the song forward, throwing us into the album from the get-go. This ability to hook people into an album’s sound so quickly proves highly effective, as this contagious energy is maintained through the album and highlights something which works so well for this creation: they haven’t tried to be too clever. So many of the characteristics of their classic rock sound from all those years ago has remained in the music, which gives fans a sense of familiarity but with a refreshing new setlist of tunes. The band clearly know what has attracted their audience over the years and have made sure to fulfil listeners’ rock ‘n’ roll cravings.

Despite the Leppard-esque qualities, Diamond Star Halos brings a new wave of character to the table in the form of bluegrass-country singer Alison Krauss, who sings on This Guitar and Lifeless. Her soprano vocals add a supple high end which brings an impressive sweetness to this brace of songs. The band also take a step back from the brash guitar riffs and pounding drums from some of the other tunes, stripping back this harsher persona to reveal a softer, more heartfelt style. However, the Def Leppard sound still peeps through in these two numbers, making its presence known at moments such as Collen’s shrill guitar solo near the end of Lifeless.

All in all, Diamond Star Halos achieves all that a fresh album from an already-established band should: it maintains the typical features of the music which fans have loved for so many years, while still offering something new and exciting. Listeners should be thrilled, especially as new shows have been added to the ongoing tour with tickets becoming available soon.