With her third album release, Courtney Barnett has showed why there is beauty in simplicity. Recorded and co-produced with Warpaint drummer Stella Mozgawa, Barnett has created an album void of theatrics but full of wit and earnestness.

The Australian singer-songwriter is well known for her laconic delivery and universal lyrics. Her song Depreston from her 2015 debut LP Sometimes I Sit and Think, and Sometimes I Just Sit spurned me on to purchasing a coffee machine with the lyrics “Now we’ve got that percolator / Never made a latte greater / I’m saving 23 dollars a week,” to this day, this is the only song that has helped me financially. Barnett is comfortable in the relatable; her song-writing focusses on honesty and empathy rather than adopting an abstract style where meaning can get lost in confusion. 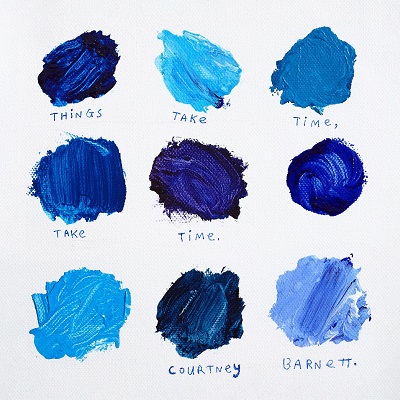 Stripped of her normal studio band (bassist Bones Sloane, percussionist Dave Mudie, and second guitarist Dan Luscombe) due to Covid restrictions and logistics, Barnett was forced to adhere to a more back-to-basics approach. The restrictions imposed on the recording process have manifestly allowed us a sneak peek into her creative process with a record that feels like an intimate conversation between friends. Things Take Time… track listing is filled with songs that feature a hazy dream landscape coupled with Barnett’s subdued spoke-sung meditations. The mellow texture of the album never feels sombre but rather cosy and peaceful in nature.

The album opens with the lead single Rae Street, a quaint portrait of everyday life viewed from Barnett’s window. The song is backed by sleepy guitar strums as Barnett lethargically recalls her point of view: “The day begins to shine / The parent teaches the child how to ride / The bike wobbles side to side / Two dogs entangle, everybody smiles.” The idyllic, mundane encounters feel lost on Barnett who is watching from afar rather than experiencing them herself. The rhythmic, gentle melody promotes the restlessness that self-isolation can impose: “I’m just waiting for the day to become night.” Barnett is sleepily wishing for the urban life scene to end.

This daydreaming texture appears in such songs as Here’s the Thing and Before You Gotta Go, the latter being a gentle murmur of staying cordial during a breakup: “If something were to happen, my dear / I wouldn’t want the last words you hear / To be unkind.” The repetitive nature of the song represents the carousel of thoughts we encounter when we question whether we have hurt someone. Here’s the Thing is Barnett at her most creative; she describes the song as a “simple, beautiful song” and it is impossible to argue with that assessment. A slow, rhythmic composition that holds us gently, taking us on a journey over tender waves as we get carried away with vocals and a hypnotic melody.

Things Take Time… is a quieter, more tentative release than Barnett’s previous outings. Songs such as If I Don’t Hear From You Tonight and Take It Day by Day include catchy, pop-filled hooks that feel small in comparison to previous outings. These tracks exhibit a demo-like quality that cannot be found in today’s climate of overproduced pop records. They are charming in their finished product and with the use of handclaps, eccentric guitar riffs and the odd cowbell here and there, Barnett entices us with musical naivety. She uses simplicity to endear the listener and her laid-back delivery feels catatonic in our ears.