The iconic Marc Almond has announced a special concert celebrating his 65th birthday at London Cadogan Hall, in aid of the charity Headway, the brain injury association.

‘Headway is the UK-wide charity that works to improve life after brain injury by providing vital support and information services. They were there for me after my motorcycle crash. They are there for so many people helping them rebuild their lives. I am 65 years old this year and after all I went through that is something worth celebrating. Thank you Headway.’ – Marc Almond OBE

Marc will be joined in the acoustic performance by his regular collaborator Christopher Braide. The pair will perform Marc’s twentieth studio album ‘The Velvet Trail’ in its entirety, as well as some further hits and surprises.

Braide produced ‘The Velvet Trail’, which went on to receive critical acclaim, alongside Marc’s most recent solo album ‘Chaos and a Dancing Star’ released in 2020.

The show will go on-sale on Friday 10th June at 10am, with tickets available from Ticketmaster.

Marc Almond’s lauded career, spanning over four decades, has seen him receive an Ivor Novello Inspiration Award in 2013, a Brit Award as well as an OBE in the 2018 New Year Honours for his services to arts and culture. 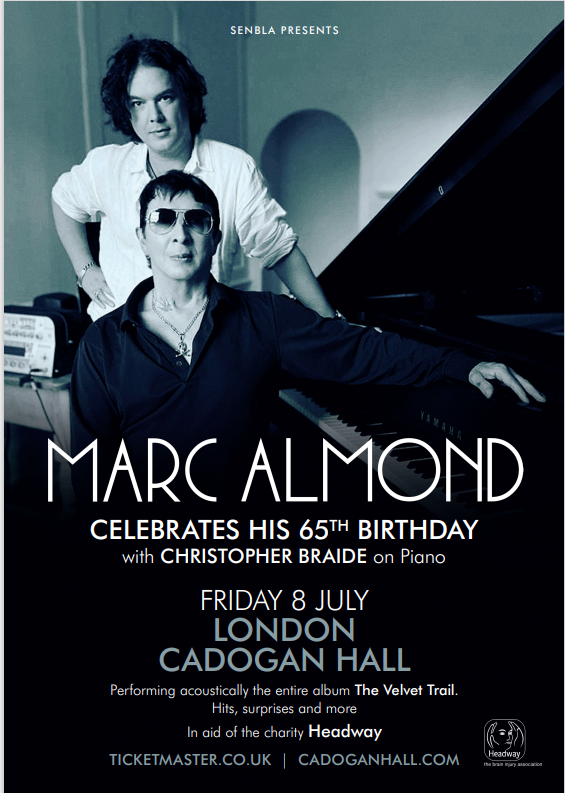 Having sold over 35 million records worldwide, Marc Almond has enjoyed both critical and commercial success realising decades of chart dominance. Marc has had international singles and albums chart success with Soft Cell and as a solo Artist covering four decades as well as two number one singles. Tainted Love being one of the biggest selling singles worldwide has influenced and inspired a generation of artists and musicians.

Marc also recently announced his rescheduled UK solo tour due to take place in October, with tickets available from Ticketmaster.