Gabrielle has announced details of her 30 Years of Dreaming Tour 2023. The tour will see her celebrate the 30th anniversary of the release of her era-defining smash hit #1 single ‘Dreams’ and perform highlights from her catalogue of hits, which also include ‘Rise’, ‘Out Of Reach’ and ‘Sunshine’.
.
Gabrielle says, “Going on tour to celebrate 30 years of ‘Dreams’ is just amazing. I can’t wait to party with everyone and celebrate the record that launched my career three decades ago! Time sure does fly when you are having fun.”

And the fun continues in the biggest way imaginable when Gabrielle joins Adele as special guest at her two huge sold-out BST Hyde Park shows on July 1st and 2nd. Adele personally chose Gabrielle for both shows, in the process cementing their shared mutual admiration. Adele has been a fan of Gabrielle’s for years, and revealed on The Graham Norton Show that her very first live public performance was a rendition of Gabrielle’s #1 smash hit ‘Rise’. Meanwhile, Gabrielle’s affection for Adele was also a recurring theme of her interviews in support of ‘Do It Again’. Two jaw-dropping vocal talents who write exemplary, emotionally striking songs? Perhaps it’s no surprise that they’re kindred spirits.

Gabrielle adds, “I’m so thrilled and proud to be part of what will be an incredible day, headlined by an artist I love and adore. Adele is a phenomenal singer songwriter and it is an honour to be asked to join her at British Summer Time.”

Adele tweeted, “The line up for my Hyde Park shows next week is going to blow your socks off!! An all female bill, from new artists that I’m obsessed with to the heavenly @KaceyMusgraves to one of my favorite artists of all time @GabrielleUk who I’ve loved since I was 4!!”

Tickets for the 30 Years of Dreaming Tour 2023 go on general sale from 10am next Friday, July 8th. They will be available from www.gigsandtours.com, www.ticketmaster.co.uk and www.gabrielle.co.uk. The dates are:

In the meantime, Gabrielle will follow the Adele shows with a busy summer of festival and outdoor shows alongside artists such as Simply Red, David Gray, Culture Club and Bananarama. See her website for a full list of dates. 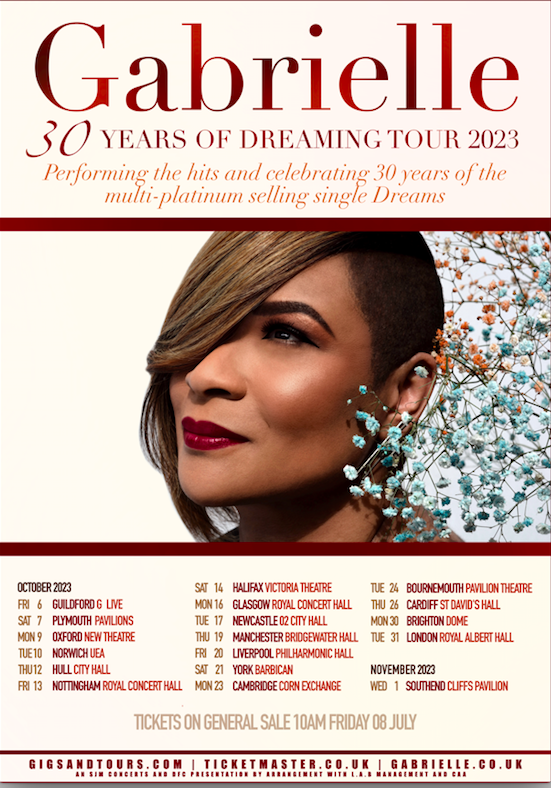