If you’d been a betting type in 1985, when A-ha smashed it with their worldwide hits Take On Me and The Sun Always Shines On TV (both UK #1s), you wouldn’t have gambled on the synth-pop trio sticking around for long. Abba aside, Scandi pop was regarded rather sniffily as saccharine, throwaway and generally inferior to its US and UK equivalents. Pretty boys Morten Harket (vocals), Paul Waaktaar-Savoy (guitars) and Magne Furuholmen (keyboards, guitars and vocals) initially appeared to have no more substance than your average fleeting teenage sensations….a Norwegian version of Bros and their ilk. 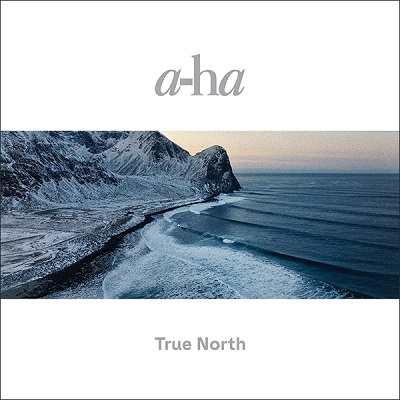 True North is A-ha’s second album since reforming in 2015 (their 11th overall). Conceived as a dual film and audio soundtrack, the band have described it as “a poem from the far north of Norway”. As a standalone piece of music True North mostly hits the spot. The music has a sweeping cinematic sophistication, mostly soft and melancholic and as far removed from their synth-pop days as London is from Oslo. Morten Harket is still in fine voice and the instrumental arrangements are generally very pretty. There’s a confusing disconnect between the album and the movie however. The latter is part concert-footage featuring the trio recording semi-live with the Arctic Philharmonic in Bodø, a town 55 miles north of the Artic Circle, interspersed with footage of the beautiful Norwegian landscape – mountains, rugged coastlines and all. But the songs have bugger all to do with the nature of the place. True North is essentially a concept album without a concept.

Take the album’s opening track and first single I’m in: Magne describes it as “a song about total commitment and a show of support for someone who is troubled.” But despite the confusing theme, the track itself is truly a beauty, thanks to a sublime recipe of Harket’s iconic sweet falsetto rising above the cinematic orchestral accompaniment – creating a distinctive Norwegian ambience. Their second single You Have What It Takes is a mournful, folky-pop love song, with its mellow Nick Drake-like acoustic guitar line and lush, tight harmonies in their chorus “our love is the one thing that’s never in vain”. But the standout track by miles is Bumblebee, the closest True North comes to an uplifting pop song. Here we hear real experimentation; synths battling with soaring strings, a reoccurring jazz flute line, scattered electric guitar grooves and a skittish drum pattern. More of this please.

On a first listen, True North is a slow-paced wistful journey through a chilly soundscape, lacking the superficial accessibility of their early pop hits. But stick with it and its charms gradually unfold. To use dating parlance: this one’s a keeper.

Writer and professional flautist Grace Twomey (MMus) performs regularly at gigs in South London where she’s based. All her areas of expertise include classical, pop, indie, latin and folk music.